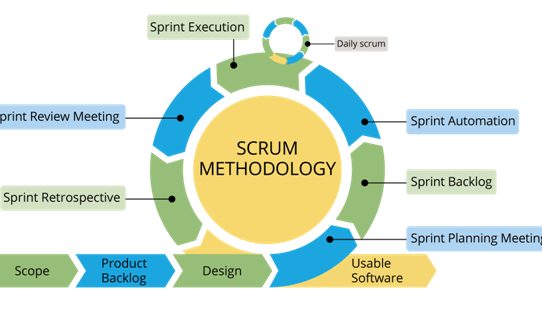 Scrum as a Software Development Method

Scrum first appeared in a 1986 paper published by management experts Hirotaka Takeuchi and Ikojiro Nonaka, in relation to rugby stressing team collaboration for overall project success. The scrum framework was then adapted to serve research practices with software development. Since then, scrum has taken on a global role in project management and software development with the first Scrum guide published by Scrum.org in 2010.

Scrum methodology is an agile framework for improving, delivering, and sustaining complex products, primarily emphasizing on software development. For an in-depth view of the capabilities of Scrum methodology, a Scrum Explainer is made to provide detailed perspectives about its function and process. Scrum methodology is now utilized and applied in other fields such as research, sales, marketing, and advanced technological projects.

Scrum in Comparison to Waterfall

How Scrum methodology compares to the older alternative known as Waterfall development.

Created in 1970, Waterfall was one of the prominent technologies for several decades for its plan-driven approach. Waterfall methodology typically goes through a lengthy planning process which could take several months before coming up with a final product.

Oftentimes, when development is being done, things get sent back to the planning phase, and the project gets delayed.

Waterfall methodology is considered old-school and outdated since it lacks the flexibility of modern-day methods. Waterfall’s stages are rigid that if a mistake needs to be rectified, the process would come under a complete restart. The cycle can happen many times over.

Here are the development phases of Waterfall:

The same issues of backtracking can occur within each sequential step. This could lead to many months or several years to set a product out.

Scrum is an implementation of Agile. The process is broken up into smaller pieces. The whole process usually takes two to three weeks. The developmental process is repeated several times from planning, development, and testing ending up in incremental product releases called sprints.

A sprint takes one or two weeks to finish. Sometimes a product can be ready after one or two sprints. If not, third and fourth or additional sprints are done. By utilizing this modular process, a team can eventually end up with a product that is fully functioning and shippable in a short amount of development time.

In the Scrum methodology, three key roles are important for product development to complete.

The Product Owner is the main designer of the product. It is the person that came up with the product and is responsible for defining the features that are required by the product. The product owner has the bright ideas needed by the team to visualize the final product.

The team can be made up of developers, testers, writers, or anyone else that helps in building the product. Team players end up doing multiple roles; for example, developers may end up doing tests or testers may function as writers. Either way, the team works to get the product done.

This is where product owners create a prioritized list of features known as user stories that could go into the product. The list involves changes that are prescribed through every sprint completion.

User stories are a way of describing a feature set that follows a user statement for the product. This technique provides the product owner to specify the right amount and detail essential to the product and share it with the team. The user statement helps the whole team estimate the size of the task.

The burndown chart shows the progress of each development sprint. It notifies the whole team of each completed task in the sprint backlog. The chart should approach zero points as the project continues to unravel.

The Ceremonies that Makes Up Scrum

Sprint Meetings are group discussions where the product owner, scrum master, and the whole team discuss the user stories and estimate the possible size of the task. It usually occurs before or after an incremental sprint is started.

Daily Scrum is a brief stand-up meeting where the whole development team discusses what they have accomplished since the previous meeting, what they’re working on, or anything in the process that needs assistance.

A review that occurs at the end of each necessary sprint. This is where the team demonstrates their completed work to the product owner. They also include discussions on what can be done to improve the product towards the release of its final iteration.

Scrum methodology is analyzed to have an empirical approach and borrows heavily from Agile methodology with its collaboration of teams. Software is developed with Scrum with an interactive approach by placing the needs and functions of a team at the center. Scrum methodology uses the structure and discipline available to other existing methodologies to promote quick changes concerning the development of a software product.